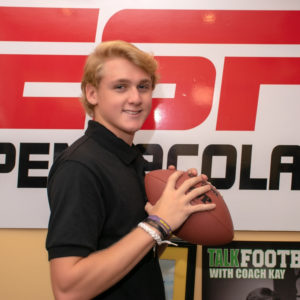 Justin always had a love for sports ever since he was a young boy. He knew he wanted his life to be involved with sports as long as possible. He grew up watching his older brothers play sports, and it made him have a connection. He always wanted more and more after realizing the love he had for sports. Justin grew up watching his favorite teams in all sports. Born in Huntington, West Virginia, he and his family have always been die-hard Marshall Thundering Herd and Cincinnati Reds fan. But when he moved to Pensacola at the age of three, he also became a pretty big fan of the Florida Gators. Justin graduated from Milton High School in 2019 where he lettered in baseball and soccer. Justin is currently a freshman at Pensacola State College, and he plans to graduate from the University of West Florida in 2023 majoring in Communications. At the beginning of Justin’s senior year at Milton, he started interning at ESPN Pensacola wanting to learn about sports statistics. But after time went on, he learned production and sports broadcasting, actually gaining a love for sports broadcasting. Justin became the producer of Sportscall with Jordan and Davis after his internship was over. He would join every Saturday talking sports on the show. Soon after that, he was named Co-Host of the show. Justin continues his work today and looks forward to having a bright future at ESPN Pensacola.