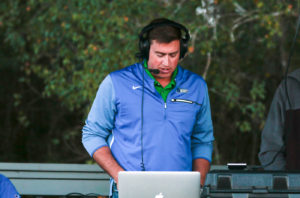 Pensacola, FL – Tommy Thrall, the voice of the Pensacola Blue Wahoos since their inception in 2012, will join the Cincinnati Reds broadcast team to be a part of their radio broadcasts during the 2019 season. The lead play-by-play and television broadcaster for the Blue Wahoos since their inaugural season, Thrall will join legendary Reds radio voice Marty Brennaman and a talented cast of Reds broadcasters throughout the season for in-game and post-game coverage.

“We’re incredibly proud of Tommy for taking this well-deserved step in his career,” Blue Wahoos president Jonathan Griffith said. “Since Opening Day 2012, he has been an invaluable part of our organization and we are grateful for his numerous contributions to Hoosville over the past seven seasons.”

During his career in Pensacola, Thrall ingrained himself in the local sports community as the voice of the Wahoos, University of West Florida football and basketball, and high school football. The 2015 Southern League Broadcaster of the Year, he made his Major League debut during the 2018 season, calling three Spring Training games for the Reds and three regular season games in September.

Blue Wahoos partner with ESPN Pensacola for the 2019 Season

The Pensacola Blue Wahoos and ESPN Pensacola announced a joint partnership on Wednesday, making the ESPN affiliate the radio flagship station for Blue Wahoos Baseball in 2019. All 140 Blue Wahoos games this season will […]

The Minnesota Twins it is. Going right up to the deadline the Pensacola Blue Wahoos and the Minnesota Twins signed a player development contract (PDC) for the 2019 and 2020 seasons. The final Double-A affiliation […]

The Blue Wahoos announced on Friday that a familiar name will be taking over the team’s lead play-by-play broadcast duties in 2019. Chris Garagiola, the grandson of Hall of Fame broadcaster Joe Garagiola Sr., will […]